Home › Vietnam › Cooking and other adventures at An Villa

Cooking and other adventures at An Villa

We found a little oasis to escape to outside of Hoi An called An Villa.  We had our own room overlooking the pool where we could watch lovely sunsets each night.  The beach was less then 2 kilometers away or we could just walk around quiet neighborhoods and rice fields.  We spent our last week in Vietnam really enjoying this hotel.  We met a few new friends while we stayed there.   In particular Phuong, who worked at the hotel, was very helpful.  One day she offered to cook with me in the kitchen.  We chatted and enjoyed ourselves all the way through preparation and eating.  I am using this blog post to document the recipe and will try to make it again here in France.

Clean and prepare the Squid:  Phoung told me that in Vietnam they keep the outer skin of the squid when they cook it.  It gives a more fishy taste.  I will try that one day but the squid below were cleaned just like I always do, removing the ink and outer skin, cutting out the hard mouth of the squid.

Squid cleaned and ready to cook 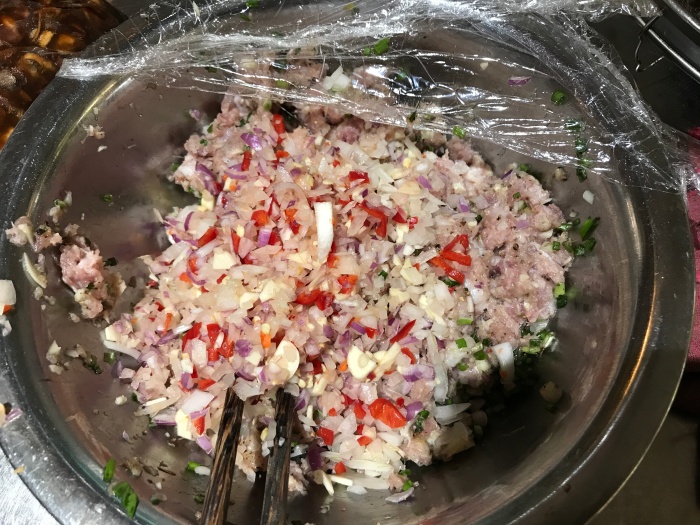 Onions, Shallots, green onion, chilis, and pork to be combined

The mushrooms below may be difficult to find outside of Asia.  The important characteristics were somewhat firm consistency (crunchy) and a mellow musty taste.

Chop the mushrooms into thin strips and add to the pork mixture. (Mix everything well)

Stuff the squid: We used chop sticks to stuff the squid.  Phuong was able to finish off 3 of them to my 1, she was much better at it.  We did talk about using toothpicks to seal the end of each squid but in the end we just cooked them with out sealing the ends.  Then we just chopped off the extra pork mixture that came out during cooking.

Cooking the stuffed squid:  We heated up a ceramic pot (medium depth) over high heat and browned the squid on each side.  Roughly 8 to 10 minutes total.  The stuff squid was not cooked when we removed it from the pan and set it aside.

Note: the green leaves in the picture below were used to wrap up the extra pork mixture and we cooked them too.

Squid after just getting a little color on each side

Cooking the rest of the squid:  Continuing with a relatively high heat we added the other squid parts to the pan and browned them a bit too.

The heads and tentacles

After the squid had all been browned lightly we removed them from the pan and scraped the bottom, keeping all the good stuff.  We added the remaining garlic, shallots, and chilies and sauteed them in the pan.

Chili, garlic, shallot to add to the sauce

Coconut water (did not use the cream)

Then we added the coconut water to the pan as well as a tablespoon of fish sauce and sugar. We also added chili sauce (to your taste).  Now place all of the squid into the liquid and let it simmer on medium heat for 10 to 20 minutes.   After the mixture has started to reduce and caramelize at bit, we turned up the heat and added tamarind.   We cooked an additional 10 to 15 minutes. 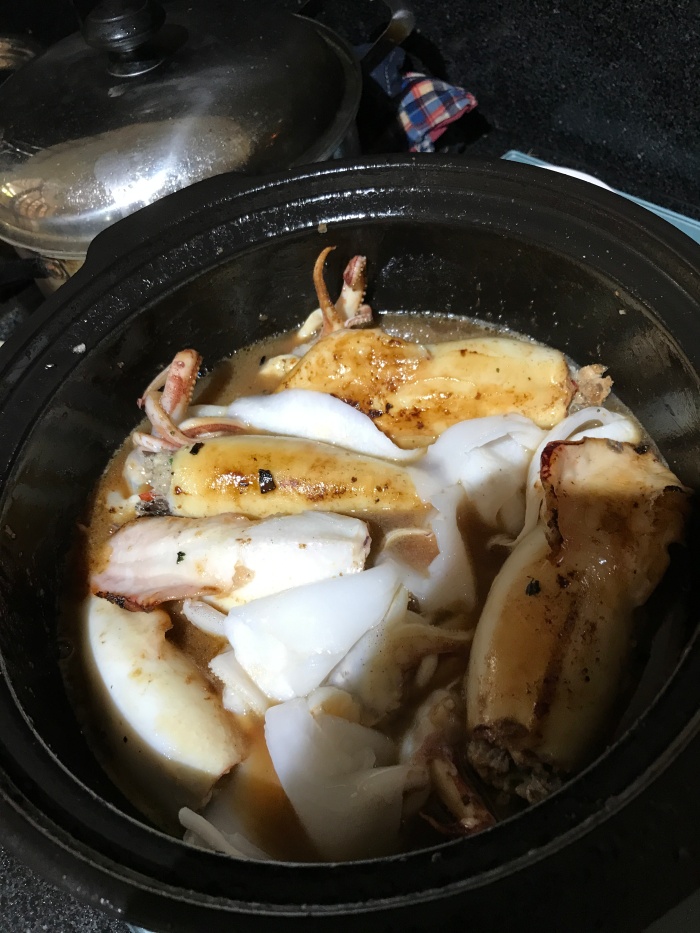 Once the sauce had reduced we removed the squid and sliced it as in the picture below. 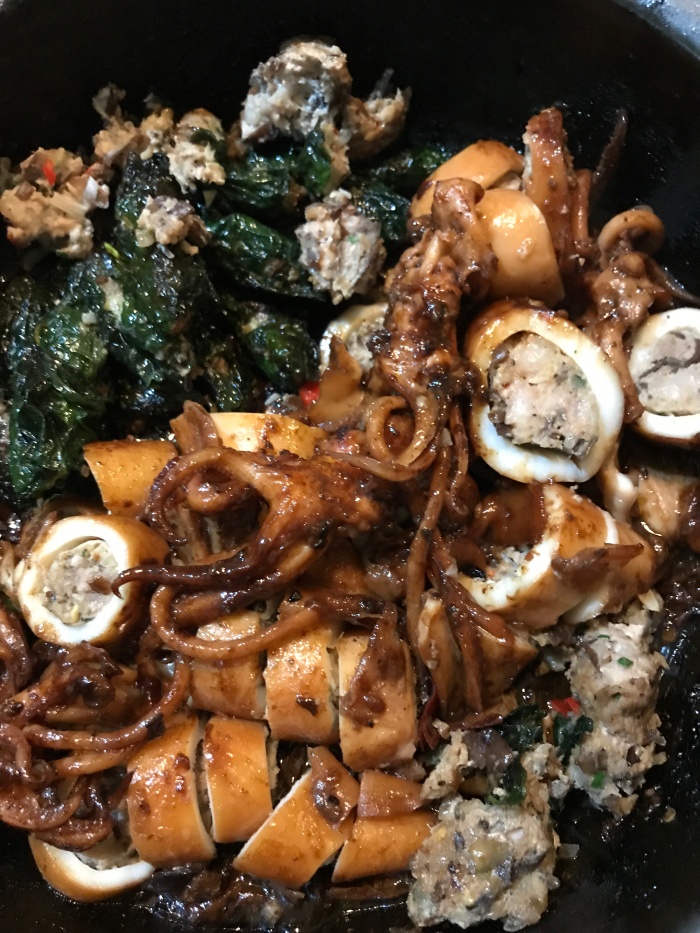 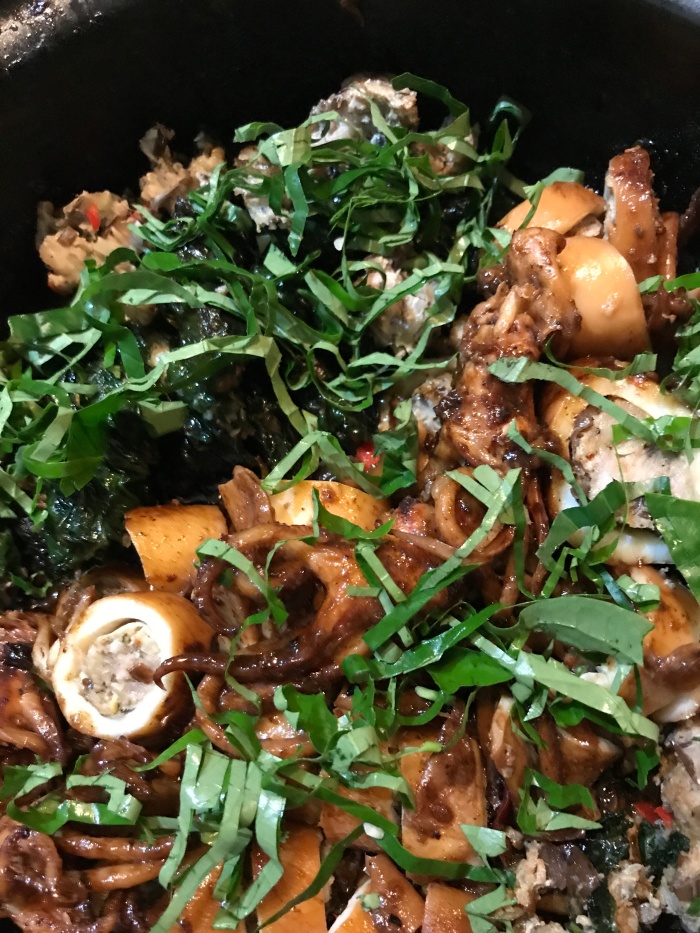 The meal was delicious and we sat down with Phuong and the other staff at the hotel for a delicious lunch.

Thanks so much to Phuong and the great folks at An Villa.  I can’t wait to try this recipe at home.