Home › Laos travel › Above the clouds in Phongsali

Above the clouds in Phongsali 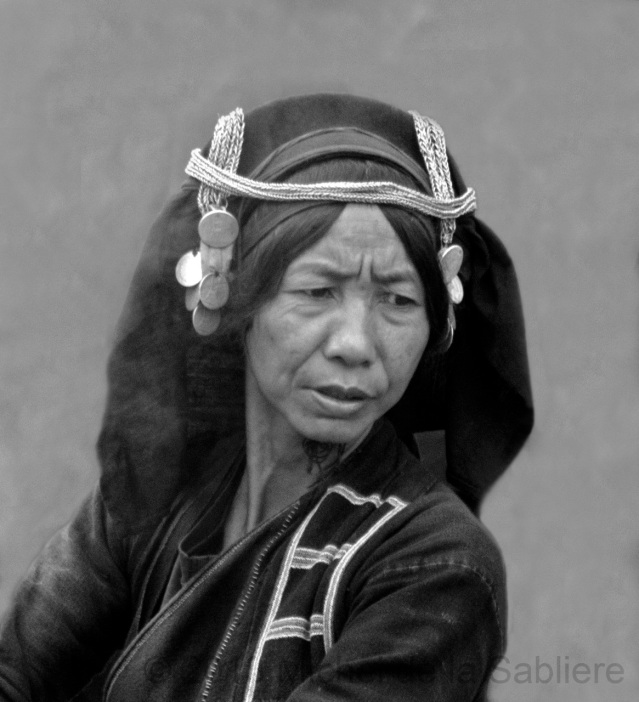 Everything feels different up here in Phongsali. We are so high up that we are sometimes above and most often in the clouds. The temperature has dropped down to about 14 degrees Celsius and colder at night. The rain started on our second day and everything is grey and wet. We have only seen 4 other tourists in town and none of us have spoken to each other. We have met two locals who speak English; one a monk at the temple, the other a woman at the tourist office. 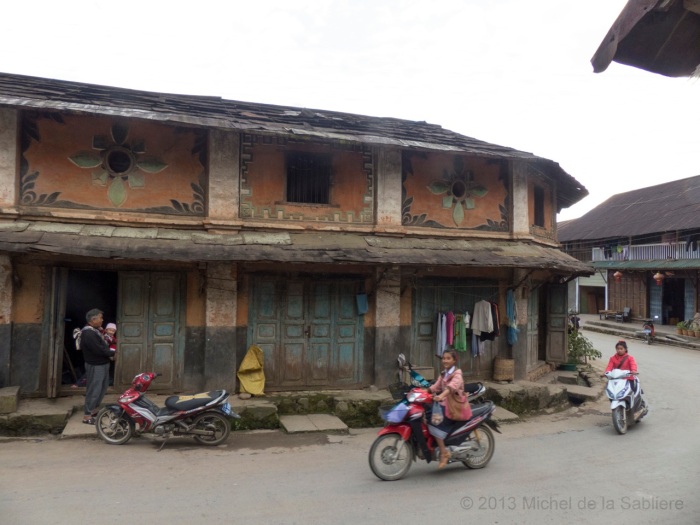 This is not a tourism town. Many locals are involved in Laos Tea production. Most folks here do not live in poverty. When we walk down the street the towns people stare at us. We stand out as the strange people in their world. Sometimes the faces are friendly and sometimes they are not but we always smile and say Sabaidee. 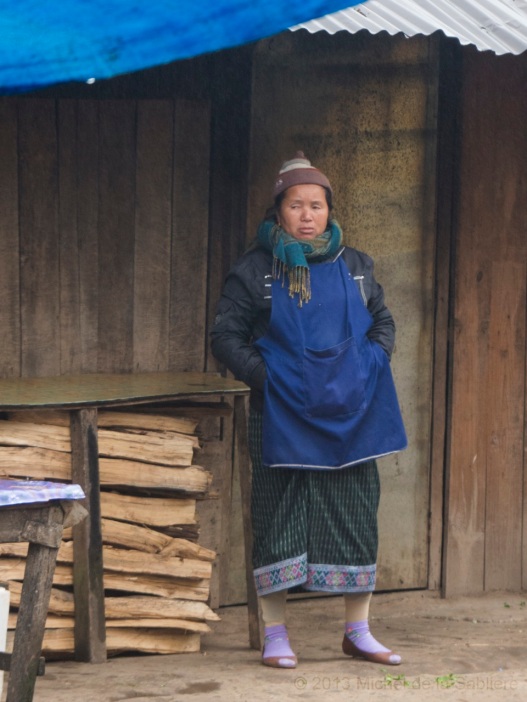 After a 20 kilometer ride up from Hat Sa on a dirt road we were dropped at the Phongsali bus stop 2 kilometers from town. We spent our first afternoon searching for a hotel which meant about 5 kilometers of walking up and down steep hills with full backpacks. We were surprised to find that the first few guest houses were full. We later discovered they were inhabited by Chinese workers.. No Internet for a while now but I had read about the best best hotel in town which was, yep you guessed it, at the highest point in town. So with Michel being a good sport, I took the lead and we headed up to the top of the town.
The “best hotel in town” was dirty, the plaster was crumbling off the walls, had very bad beds, and there was a stereo blaring near our room (all for 100,000 kip). When we mentioned no loud music to the kid who was helping us he got the “I hate all farang” look on his face. We were both tired but not feeling too comfortable. We left our backpacks in the room and went down the hill to find food.
In the center of town we found a Chinese hotel and decided to move down to it. We had passed it before but I was intent on finding the “best hotel in town”. We had since discussed the attitude of the kid at the first hotel and decided neither one of us was happy staying there. So back up the hill to get our stuff and then down again to check in to the Hotel Phongsali. 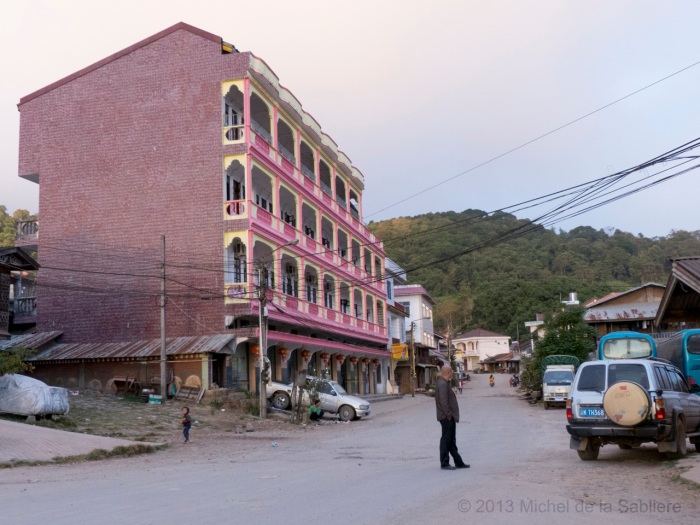 After checking in we headed out to explore the town. 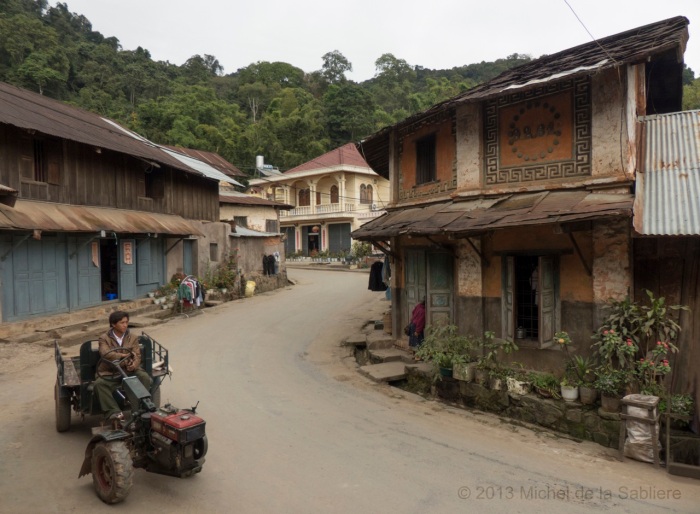 Old town and tractor runs by a strange motor 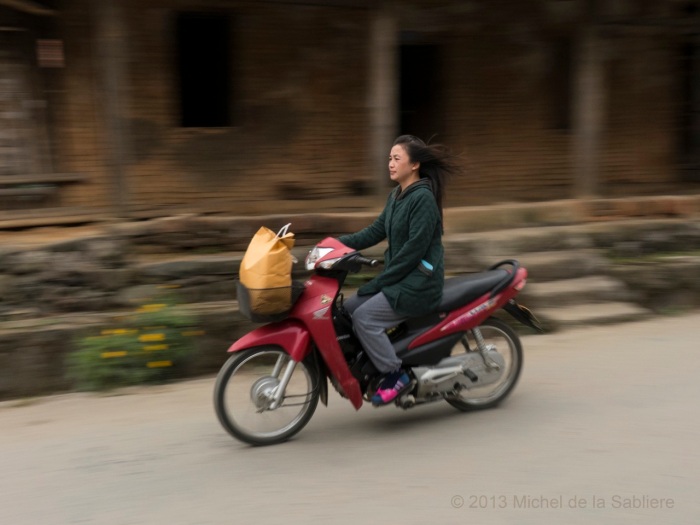 As we wandered the streets we walked through the Old Town. It is very beautiful and while walking through we had a sense of going back in time. Some of the homes were constructed of mud bricks and a few of the roads were made of cobblestones. Phongsali is the oldest town in Northern Laos that was not destroyed during the Laos Wars. 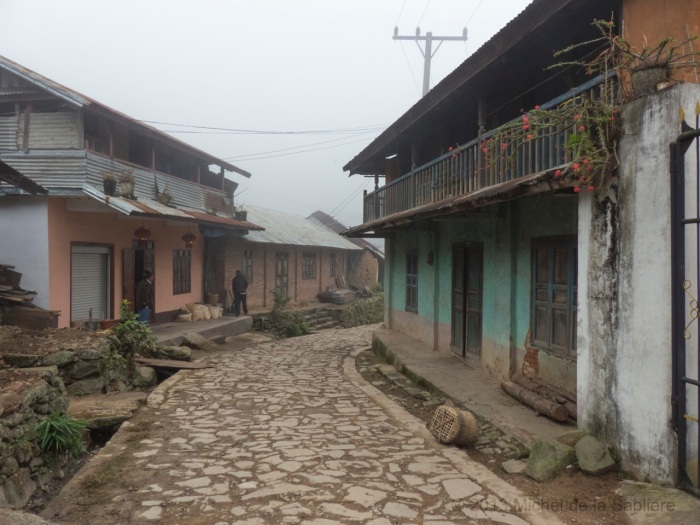 Another part of town was made of colonial style buildings. The French colonized here and maintained some involvement until the mid 1950s. 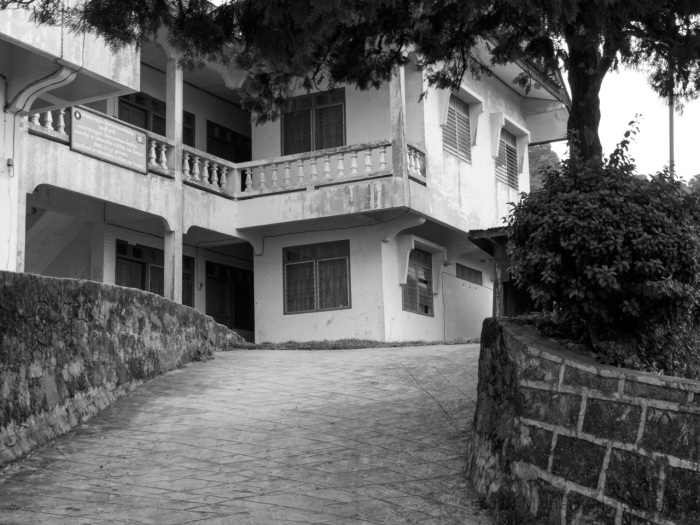 The new town is made up of private homes, the majority of which are much nicer then our hotel. Homes in Laos have tiled floors and very little furniture. At night thin mattresses are placed on the floor for sleeping. Kitchens are usually fire and coal burning although I have seen a few butane stoves. Toilets are normally squat style which guarantees your thighs stay strong. 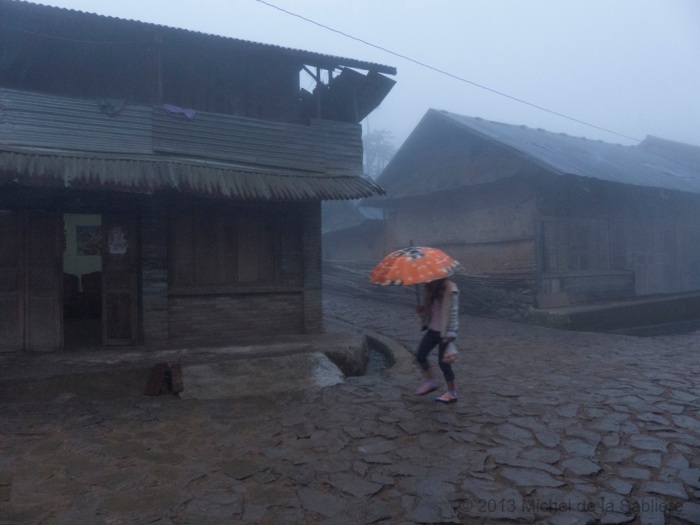 I read somewhere that Phongsali Provence would have been part of Yunan China if the French had not colonized here. Many of the local faces have Chinese features. The sight of the red star insignia on a briefcase or clothing is a daily occurrence. Sometimes it does not even feel like we are Laos anymore. Communication can be more challenging as our small vocabulary of Laos words do not work in our Chinese speaking hotel. 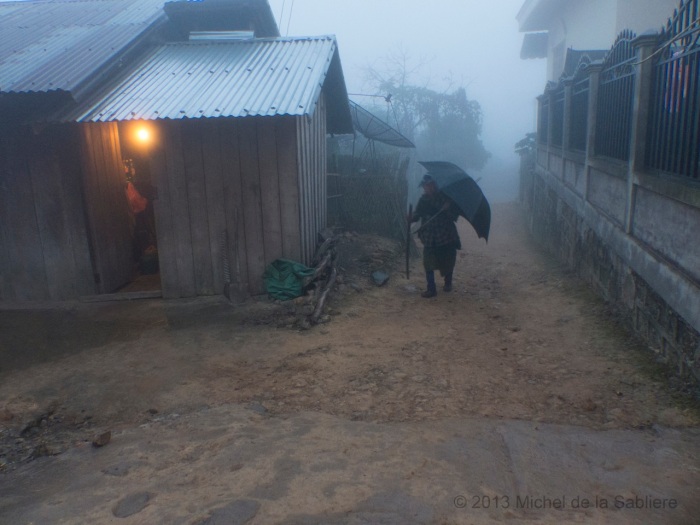 Man in fog going to light

Our hotel is mainly inhabited by Chinese hydroelectric workers and we assume they are working on the Nam Ou dam. They are loud, spit, and watch television with their doors open. However, they do smile and attempt some kind of greeting when we walk by.

From 5am to 7am each morning loudspeakers built all over town play anthem style music and a women speaks. We do not know what she is saying but while it is happening it is surreal. It happens again from 4:30pm to 6:30pm every evening. One person I spoke to in Luang Prabang confirmed that this is news and propaganda from the government and may be occurring here because of the proximity to China. The town is quiet at night and everyone goes to bed pretty early. The beds here are comfortable with thick comforters and good pillows. There is hot water for coffee in the morning and cable TV with TV5 Monde for Michel, both considered luxury at this point. We have both managed to get a few good nights sleep. Unfortunately the bathroom smells very bad but Michel has ingeniously engineered a door locking rope and line that keep most of the smell out of the sleeping area.

What an amazing adventure we are having here.

Chinese Temple in the clouds

The market is a great place to catch the locals in their daily activities. The food is all very fresh. I wish we had a kitchen here so that I could buy and cook some of these wonderful ingredients. 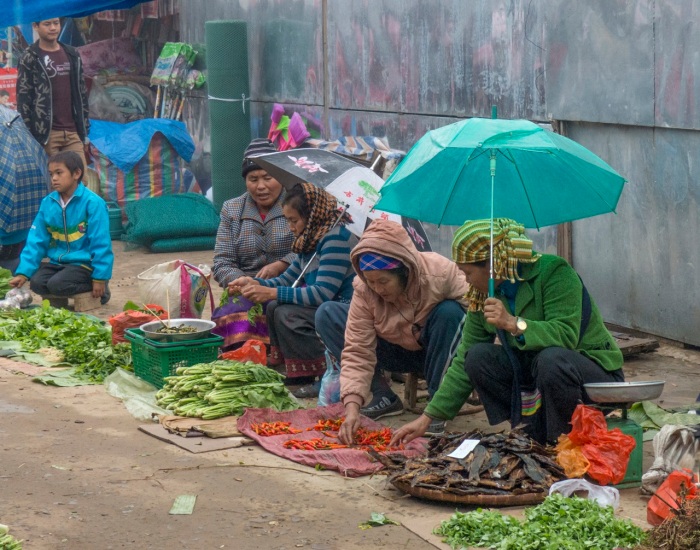 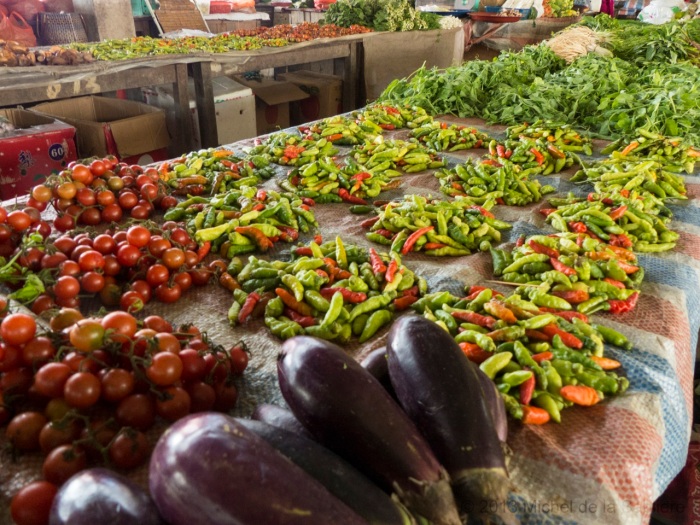 I learned that the people in northern Laos believe that being photographed may bring bad luck. Many of these photos were taken while Michel was hiding behind me or hiding behind a pole somewhere in the market. 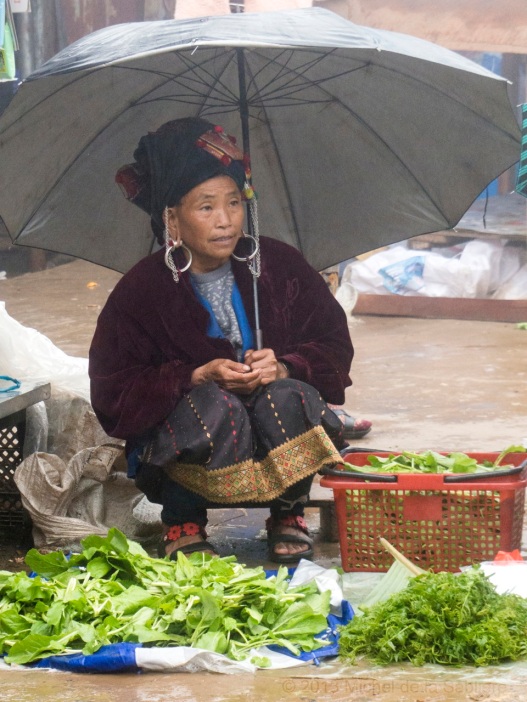 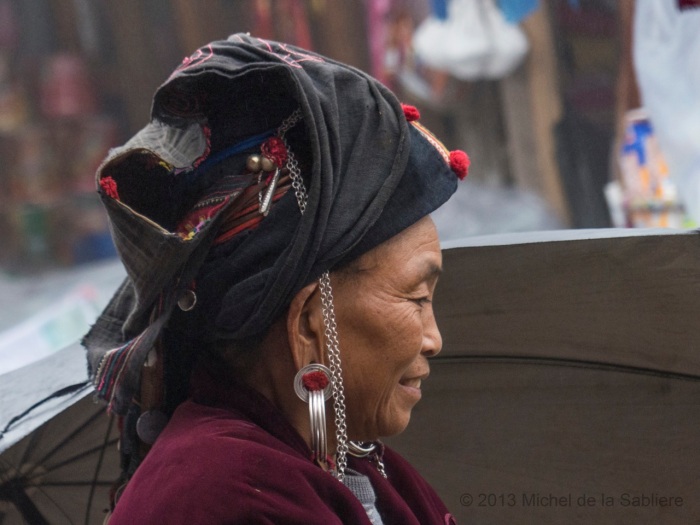 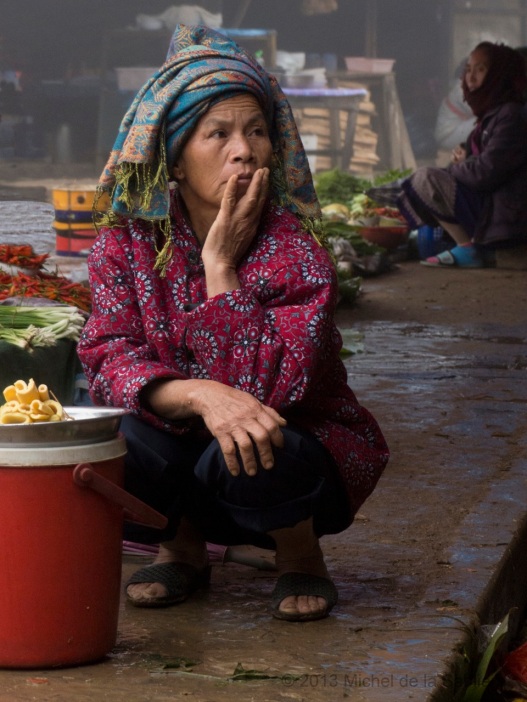 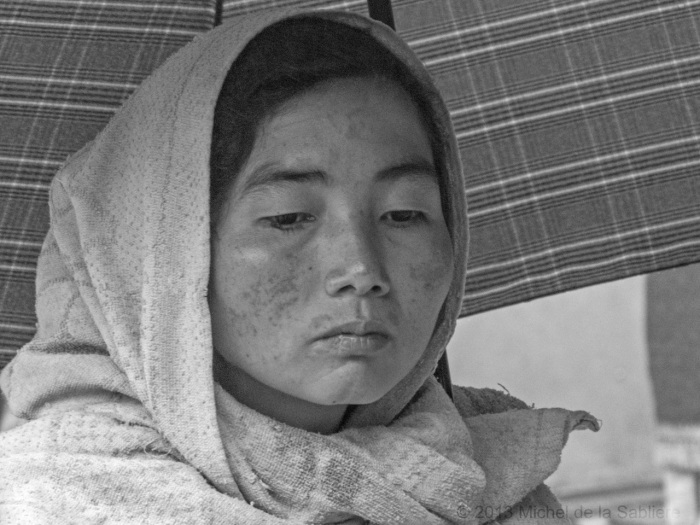 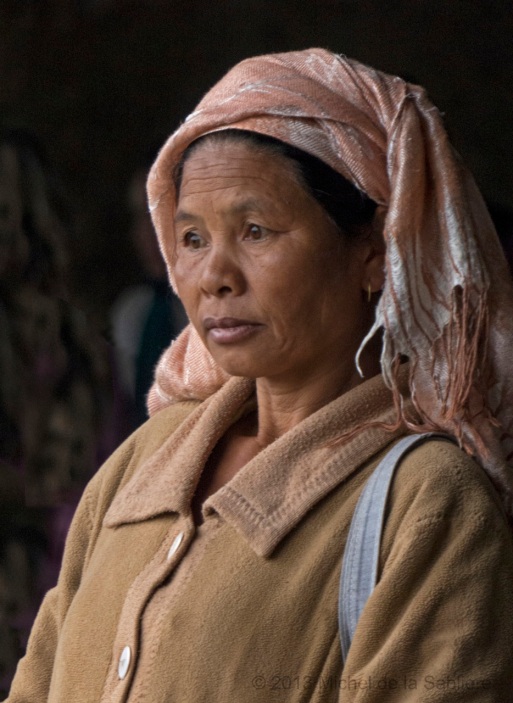 Mind in the clouds at the Market

One of the highlights for me of the Chinese influence at our hotel was dinner every night. The hotel had a very large restaurant where business people, both Chinese and local, ate at night. We ate Chinese food there almost every dinner. The menu was very difficult to decipher and we rarely knew exactly what we had ordered. However, every single meal was superb.

One time we did venture out to another restaurant where the apparent special of the day was worms. Michel and I are curious about them but the cook shook her head “no” and smiled when we pointed at them. We were disappointed when she served them to locals at the table next to ours. As we were leaving the restaurant I smiled at one of the cook’s assistants as she was grabbing uncooked worms from the pile and eating them. She offered one to me so I tried it. It was surprisingly tasteless and not half bad for a raw worm. Sort of gushed into my mouth when I bit in. I can see where it could be tasty if seasoned properly and cooked. Michel tried one too so we have both officially been indoctrinated to worm eating. 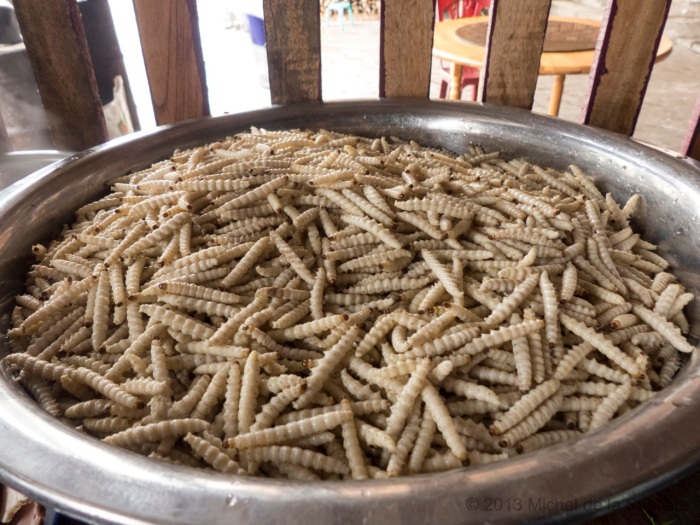 We have never felt so far away from what is familiar. There is a feeling of mystery as the clouds swirl in around us. The dampness seems unending. The dark skies, cold, and rain help to dampen our moods. We have been waiting for the rain to stop but it does not. 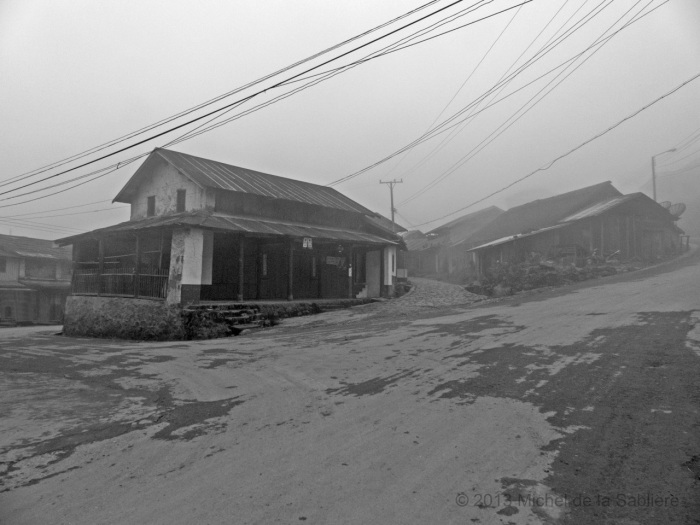 Entrance to the old town 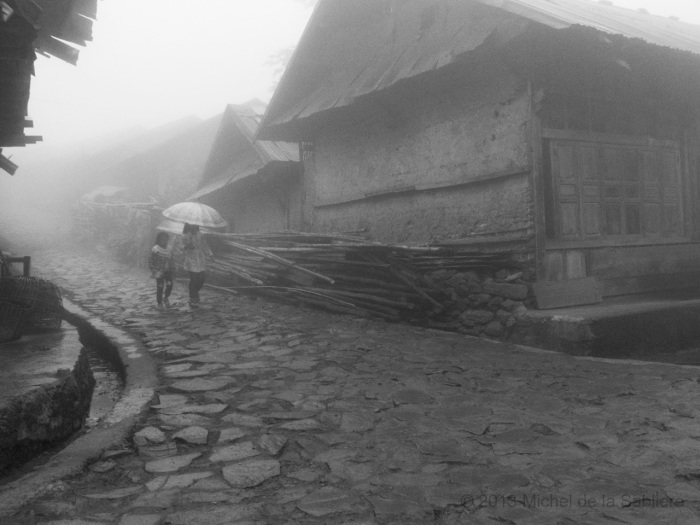 Young Girls in the mist 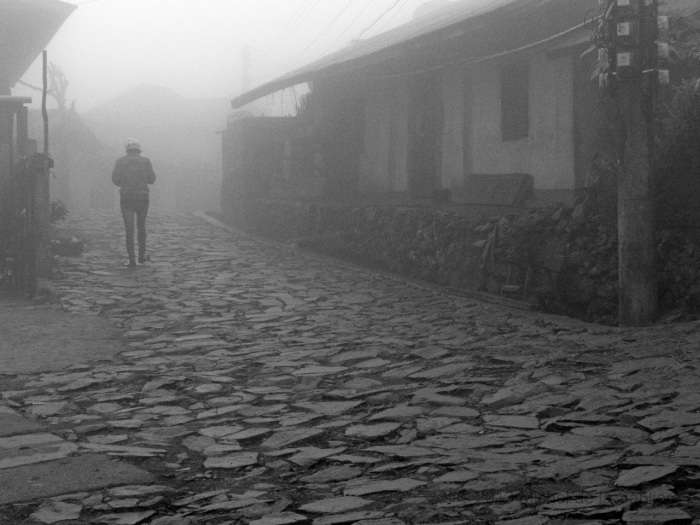 Ghosts in the town 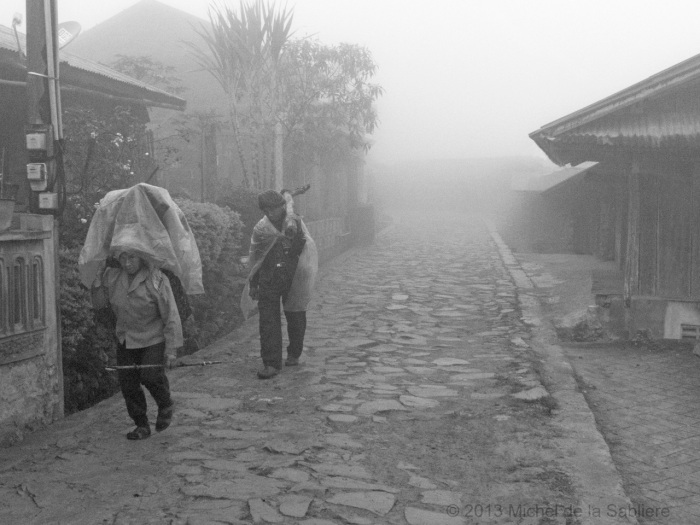 Heavy Load after hard day in the fields 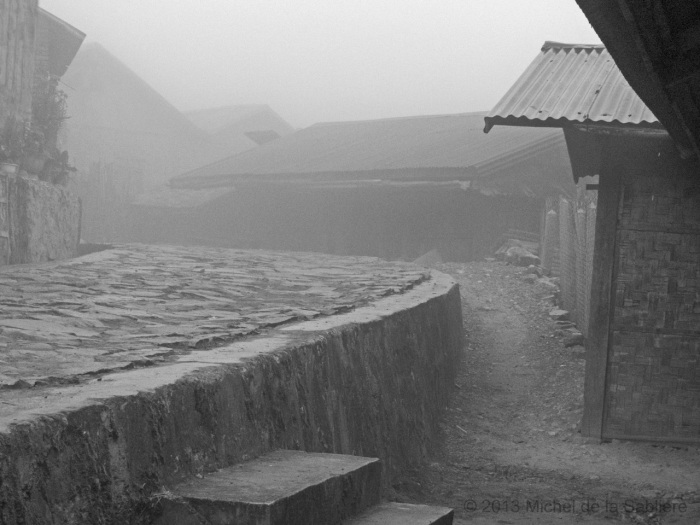 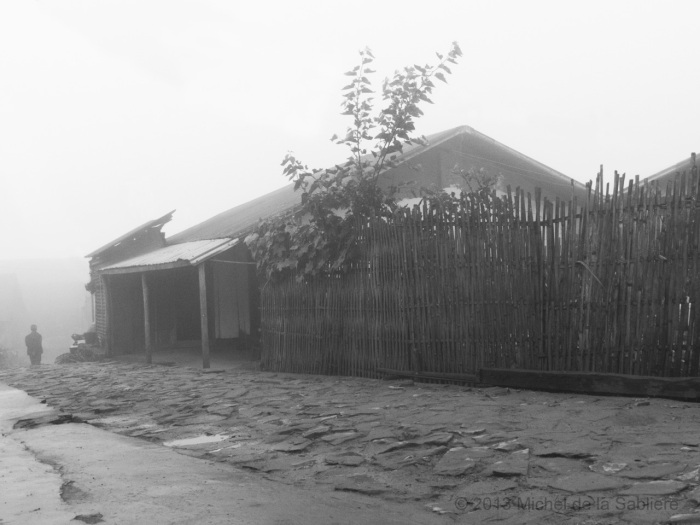 Footfalls on the cobblestones

Walking in the rain and clouds

We had hoped to do some trekking but neither one of us feels brave enough to climb the steep muddy nearby hills in the rain. As we investigated the trekking we discovered that it was only available through organized tours. We learned that some of the villagers dress in their local costumes for the tourists, ready to be photographed, while all the others go and perform daily work in the fields. Even Phongsali has been affected by tourism.
Our reason for coming here was to see the different ethnic people and even without trekking in the mountains we succeeded. There are so many different ethnic faces all around us. At the market, in the streets, and Michel has always been at the ready with his camera. 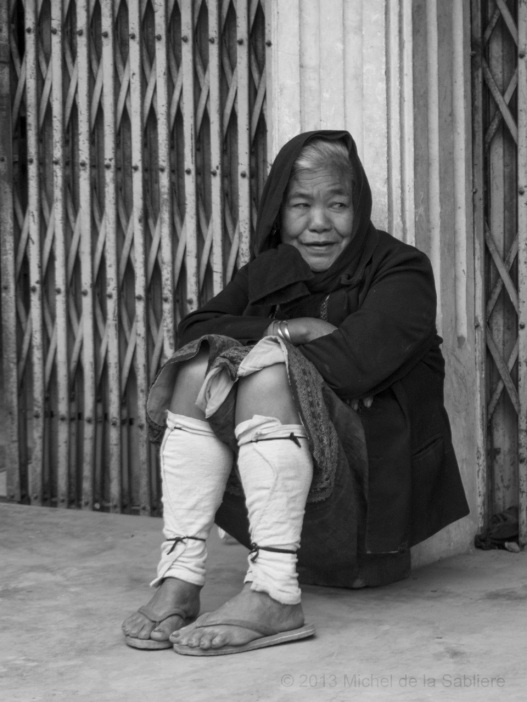 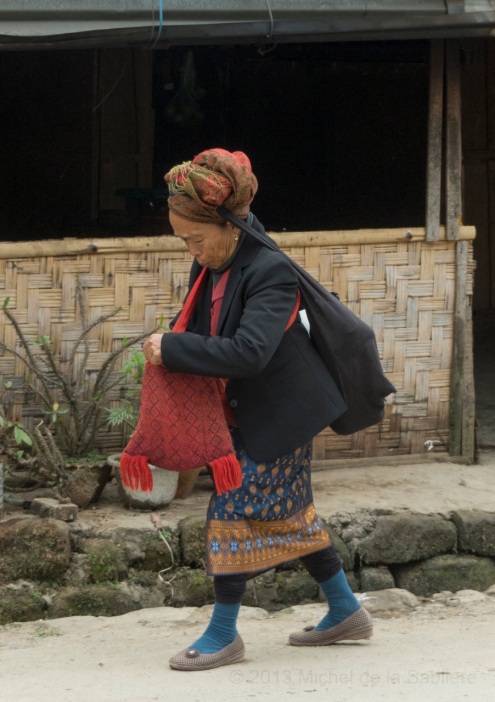 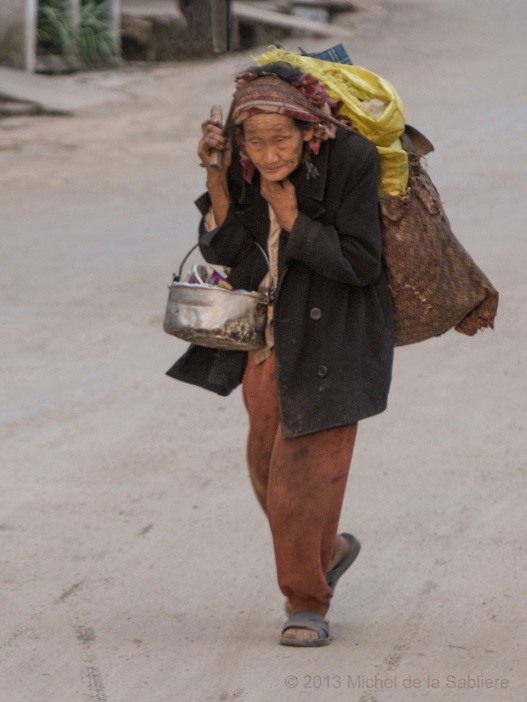 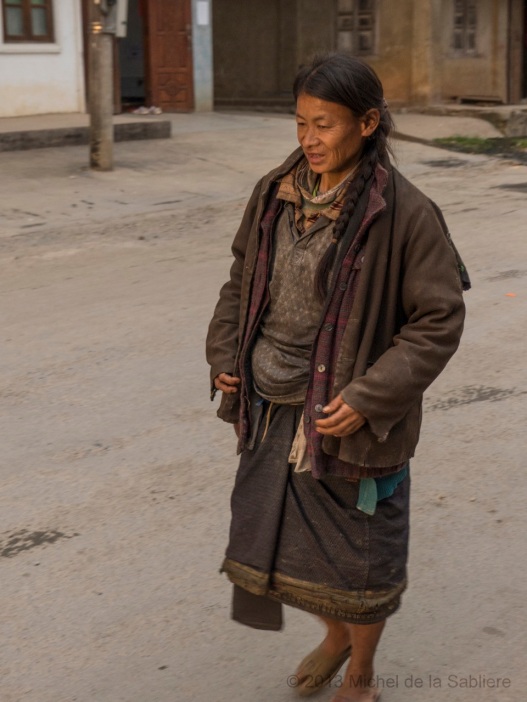 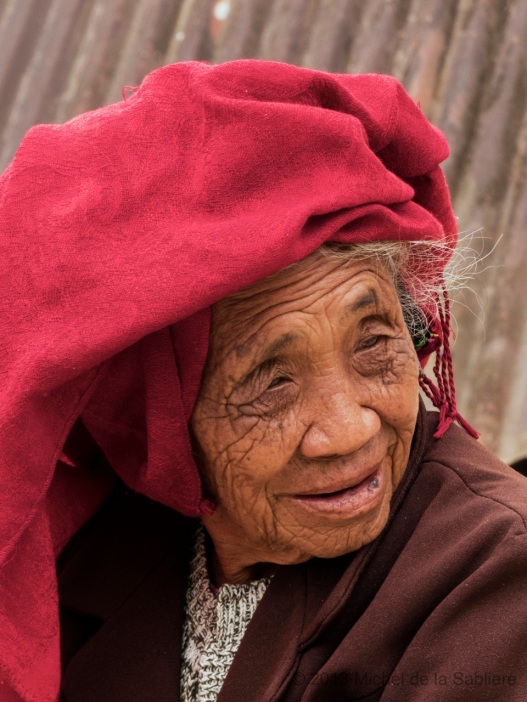 In a way, we both feel beaten by the weather and isolation. Such a contrast to the entertainment and contentment of the river trip to Hat Sa. In spite of Michel’s ability to capture many amazing photos we had a feeling of giving up when, after 6 days, we decided to leave. We felt like we had only scratched the surface of what Phongsali has to offer but the knowledge that it was sunny and warm only a 30 kilometers away was too much for us.

We packed up and headed down to Hat Sa and the boat ride back down the river.