Temples, Soup, and The Shoemaker

Chiang Mai is an interesting combination of Thai and Burmese cultures, it has been occupied by the Burmese many times and it’s architecture, especially the Wat or temples, reflect both cultures. 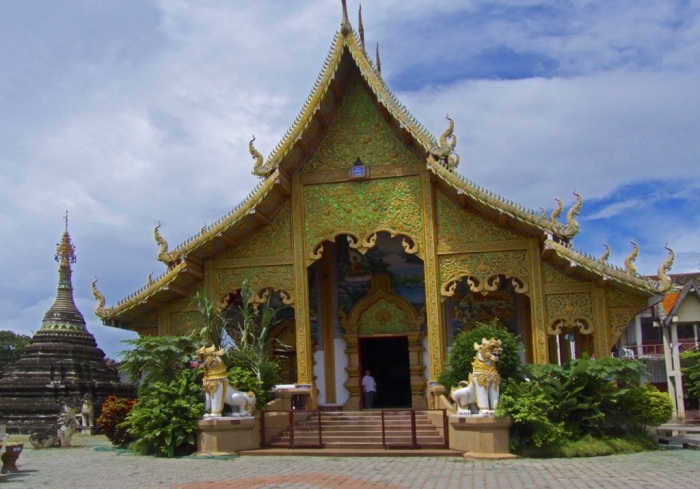 We visited many of them during our stay but my favorite was relatively unknown and on the side of town where less tourist go. One of the monks was in the temple during our visit and was performing a blessing for a local family. 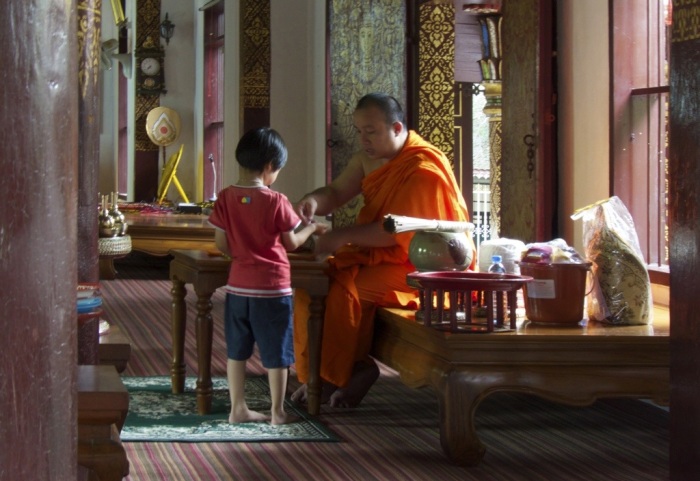 There was a feeling of peacefulness and serenity as soon as I walked in. I look forward understanding more about this religion as we spend time here.

There was also a rugged museum in the back where we were able to see a collection of old weapons, clothing, tapestries, statues, and musical instruments collected by the monks. 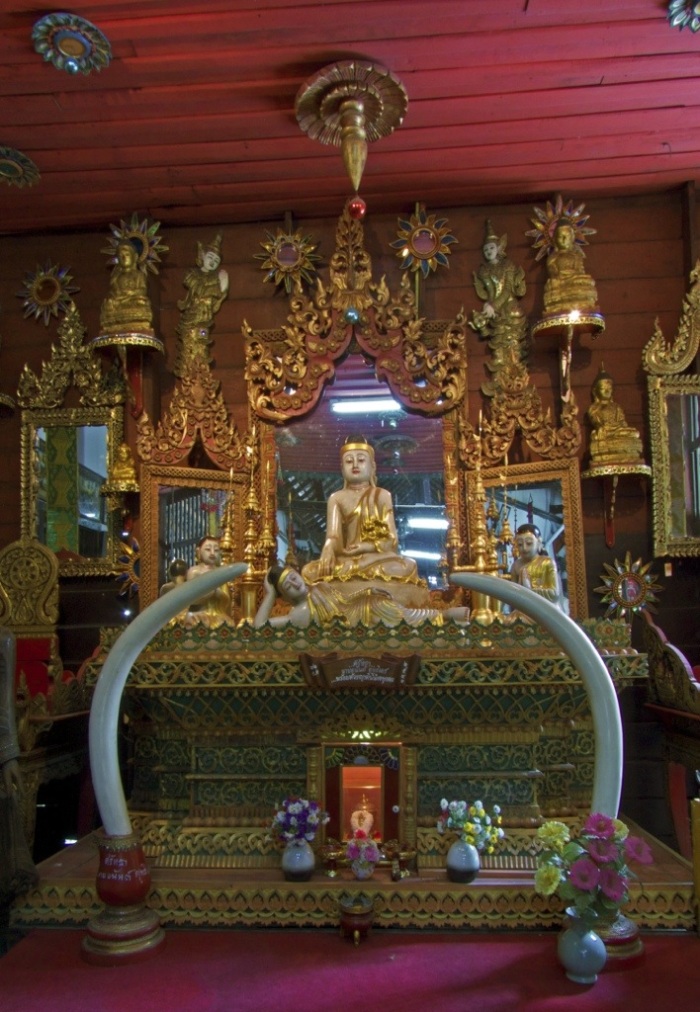 We stayed in a guest house called Galare for 3 of our nights in Chiang Mai. Very comfortable and on the river for 860 baht per night. Their restaurant cooked us flavorful curry dishes two nights in a row. From Galare we were able to walk to the local market and the famous night bazaar. 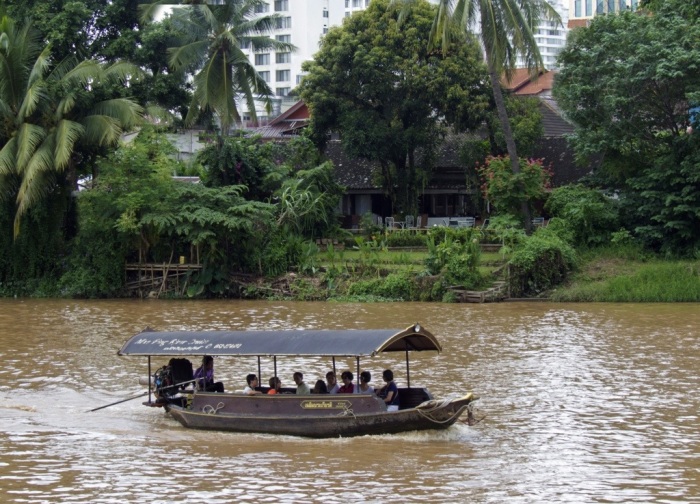 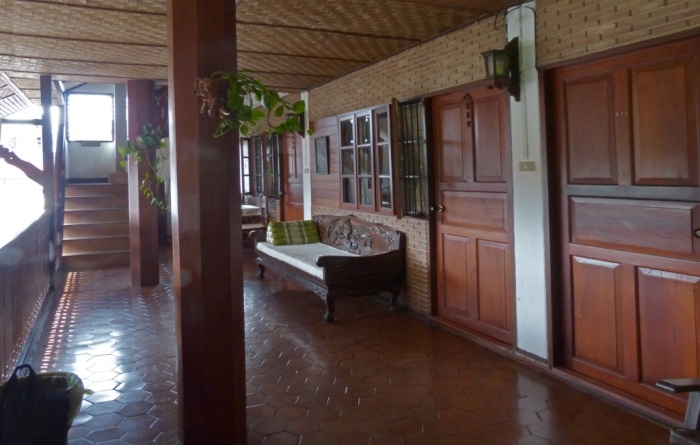 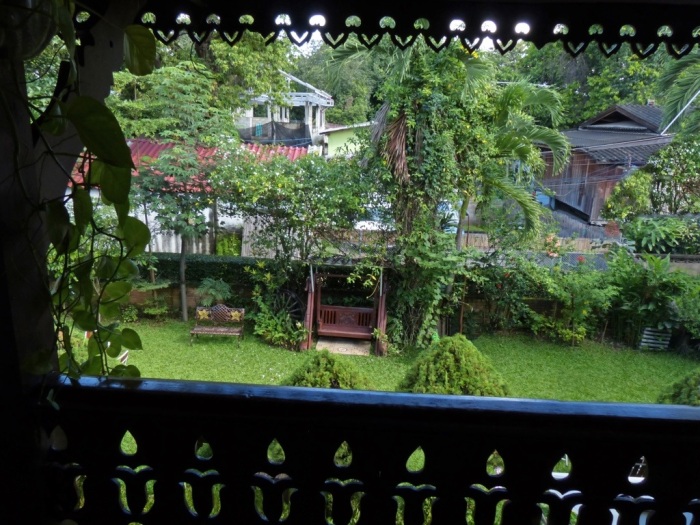 Later we moved to another hotel closer to the old city. There we were able to really come in under our budget as a comfortable room was only 550 baht a night. The guesthouse was called Kamala’s and the staff were all very sweet and helpful. 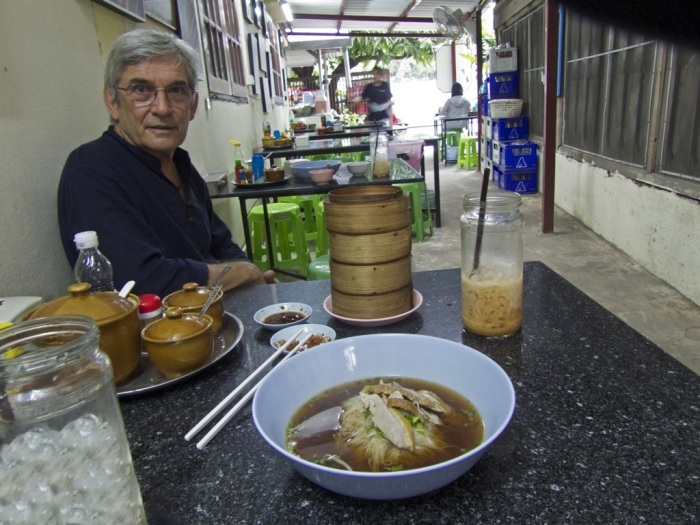 We had many culinary adventures in Chiang Mai. Our primary focus was SOUP. Above is a picture of Michel preparing to devour Dim Sum and a beautiful duck soup. The delicious broth is served over rice noodles and then you spice things up your way by adding condiments. There are always at least four condiments provided with each soup. One is pure heat, one is vinegar and green chili, another is tomatoes and red chili, and the last is a bowl of sugar. We never put sugar in our soup but I have seen the Thai put several spoonfuls in one bowl. There is always fish sauce at the table as well. So each soup is custom made to your taste.

Our next soup adventure occurred in the heart of the old city. We discovered our new favorite soup Koh Soi. 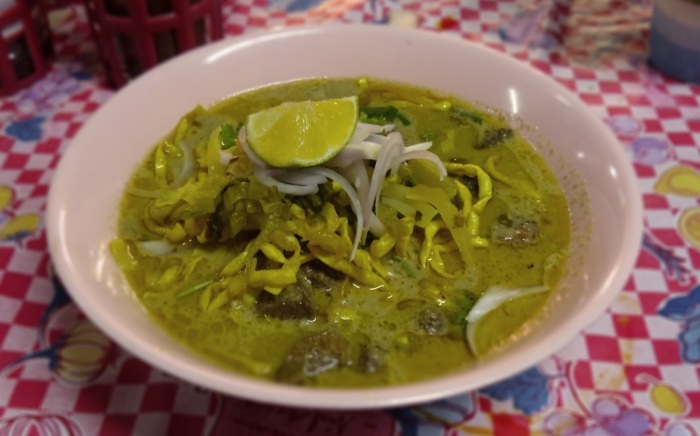 Koh Soi is a yellow curry based broth and is served over egg noodles with pork or chicken. Typically there are also some crispy egg noodles served on top as well. It is a savory flavor, neither sweet or sour, and highly addictive. 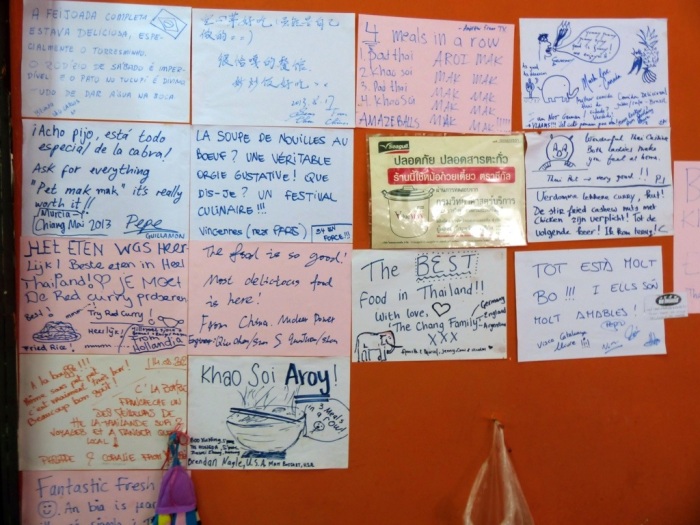 We stumbled on another kitchen nearby the next day were the customers had written the approval of whatever meal they had eaten and placed it on the wall of the hut. The Khao Soi was recommended there as well as Pad Thai. We sampled both and they were marvelous. The Pad Thai served relatively dry with pork and crispy egg. 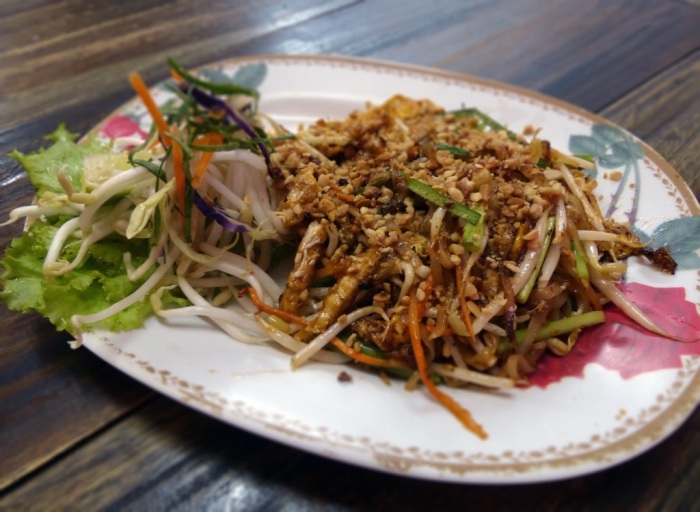 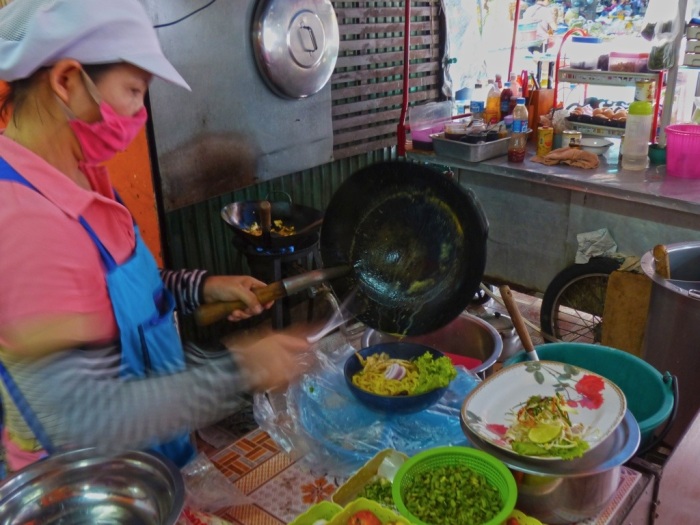 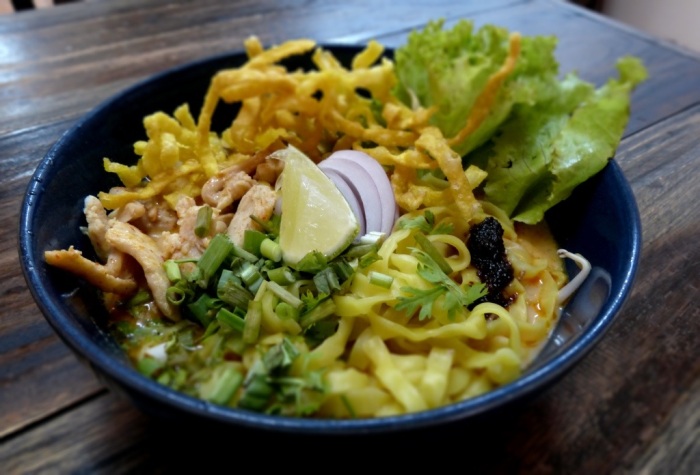 This Khao Soi was a work of art.

In one of our long walks in search of a temple and some soup my Brazilian sandals broke. The entire soul was unattached. Here was an opportunity for me to buy new shoes and that is hard to resist. Yet all of us travelers know that the search for the perfect comfortable shoe can go on for weeks.
The girls at the hotel recommended a shoemaker who had a shop near the Chinese gate. We wandered through the area looking for the shop, showing everyone my broken shoe, and saying “shoemaker”. During our wandering we discovered woven hill tribe goods and an antique shop with old opium pipes. The owners of these shops all knew who the Shoemaker was and pointed toward the gate. We searched again and still could not find the shoemaker. Finally one lady told us to look behind the phone booth next to the gate. And there was the shoemaker! 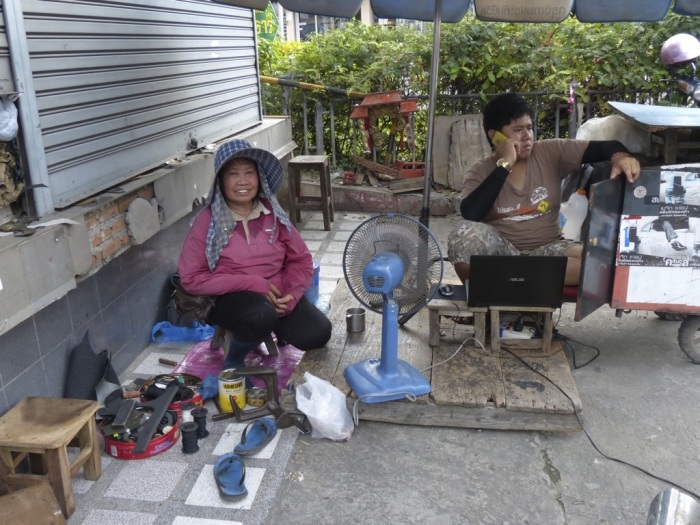 She repaired my shoes with tremendous skill using hand crafted tools. I will not need a new pair of shoes for a long time. She also repaired a nasty tare in my backpack. Once again making it better then new. All of these tasks were performed as Michel and I squatted on two small wooden stools watching her work. Next to her was her son giggling as he played games on his computer.